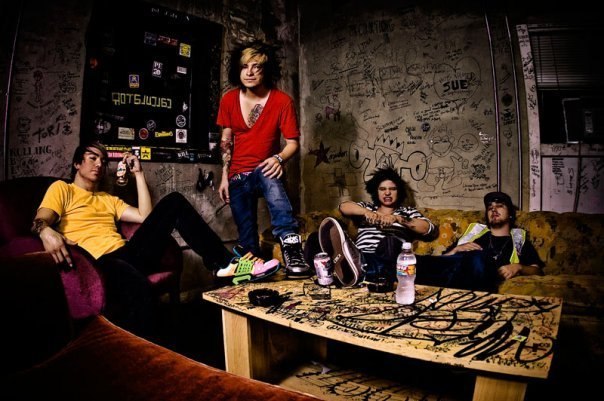 Brokencyde began making headlines after the group’s video for the track «Freaxxx» spread like a virus and racked up more than 4 million hits on YouTube. Since then, the group has put a stranglehold on the online world, developing an enormous fanbase that helped catapult their debut album, “I’m Not A Fan But The Kids Like It”, to #87 on the Billboard Top 200. Since then, the group has become one of the most talked about musical entities in decades, as MTVU, The LA Times, Revolver Magazine, producer Steve Albini and comic book writer Warren Ellis all cannot stop talking about the band that everyone loves to hate.

«On our last record we had a song called ‘Schitzo’ that took on new meaning as we toured in support of the album. There is a line in the song that says, ‘Brokencyde will never die!’ and we thought it was the perfect title for this record,» says Se7en from Brokencyde. «The title is a big middle finger to all the haters that to try to bring us down by spreading rumors and lies. We’ve taken all their hate and used it as fire to create this new album.»

For their new album, Brokencyde have pulled out all the stops to ensure that “Brokencyde – Will Never Die” is overflowing with salacious crunk. The album gets the party rocking with the sugary sweet pop/dance of the lead single “House Party”, and slips into some down and dirty hip-hop on «Karma Sutra», «My Gurl» shows the band experimenting with contemporary R&B hooks, and Kottonmouth Kings’ Daddy X lays blazes through the reggae infused “High Timez”. Put together as a whole, “Brokencyde: Will Never Die” adds a polish and sparkling shine to Brokencyde’s infectious brand of crunkcore.

“With this record, we allowed ourselves more time creatively to do what we wanted, which enabled us to take things to a whole new level,” commented Mikl from Brokencyde. “This album speaks to our amazing fans that have supported us through thick and thin, but has a little something for everyone so it can appeal to new listeners.”

«I have to say this album is the best work we’ve ever put together,” adds Phat J. “Fans are going to love it, and haters beware because it’s gonna destroy the game.»

Brokencyde have endured and persevered through obstacles that would have broken bands. On November 9th, 2010 these crunk kids from Albuquerque, NM are sending a message to their detractors that they are here to stay…. Brokencyde «Will Never Die».