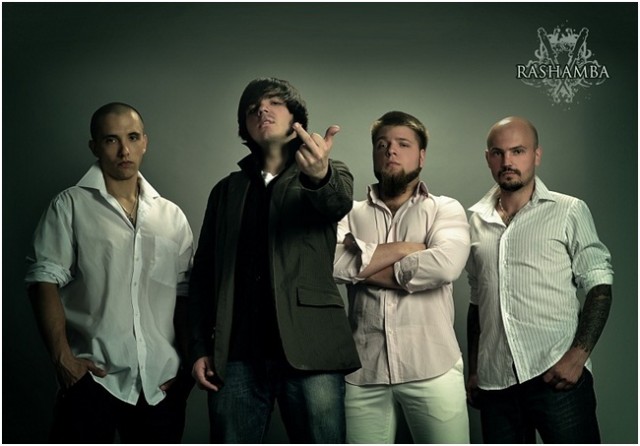 Rashamba band was founded in 2004 in Moscow.In 2005 the band issues single ‘Tears’,which entered many hard music collections. Moreover, the band has managed to record soundtrack to the computer game Rat Hunter.
In 2006 Rashamba won at the RAMP Music Awards in nomination ‘Underground Act of The Year’. The prize was to star a video to the song ‘Near The Sun’.
In 2007 the band released EP ‘Distances’ under the label KapKan Records and made more than 30 concerts around the country and near-abroad countries.
The same year comes bootleg named ‘The World stayed waiting’. On October,13 Rashamba shared the scene with Killswitch Engage in Moscow.
In 2008 as the result of shifts in membership Fedor Lokshin,Alex Vikl and Alex Hougan left the band.Then comes Sergey ‘Dead’ Dedov.
The same year Johny ‘Oldman’ Kusto-Borovinsky and later bassman Segey ‘Zerg’ Rupp join the band.
In 2009 Rashamba releases Internet-single ‘Reach the Stars’ and in the beginning of the autumn — album ‘Pralavana’.
In 2010 the band set off to big tour around cities of Russia and Belorussia. Shortly afterwards Rashamba issues its new work
‘Step into the Unknown’ and makes the second video to the song ‘More Tender than Death’.
After the autumn tour in support to the single the band takes long-term pause under various reasons. And only at the end of the spring
Rashamba comes together but there were only four of them as Alex ‘Henky’Ignatenko decided not to come back to the music activity in the band.
On the 1st day of the autumn they release the 1st after the long pause single ‘Air’ and the band starts new tour around Russia and the former CIS countries.