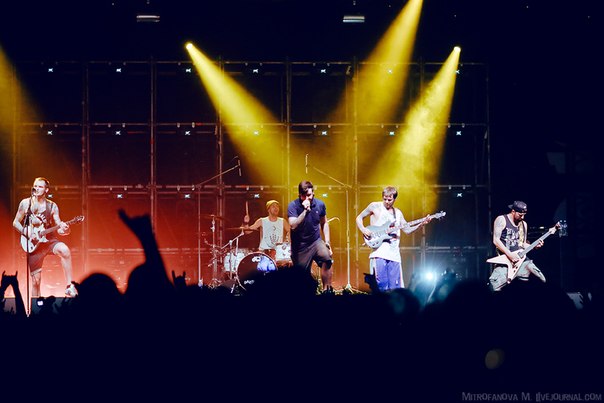 Stigmata was formed in 2003 by Taras Urmanskiy (Guitar) and Dennis Kitschenko (Bass guitar) as a nameless band. The band got its name a few month later. Some journalists said that the name have a religious background. In 2004 Nikita Ignatjew (Drums) and vocalist Artjom Lozki joined the band. In the first time of being a band the group organized concerts and a music video on his own. The same year the band signed a recording contract with Russian music label Kap-Kan Records and recorded the first full-length album entitled Конвейер снов (English: Conveyor Of Dreams).

The album was re-released in May 2005. The third album Больше чем любовь (More than Love) was released in September 2005. In spring 2006 Stigmata released a DVD called Pieces of Live consisting out of 17 tracks. The same year Nikita Ignatjew left band and was replaced by Phil Terpezki. Andrej Anissimow became the new guitarist of the band. In December 2006 Stigmata released the first single called Лед (Ice). The song was really successful and ranked in the russish Alternative Charts. The band won at the St. Petersburg Music Awards 2007 in the Category Song of the Year for their song Ice. Ice was released in the English language and is downloadable on their ReverbNation profile.[2] The group toured through Belarus, Estonia, Lithuania and the Ukraine on their first tour and shared stage with Pleymo and Natalie Imbruglia on Russias biggist Rock music festival The Wings.

The year 2007 started with a concert tour through Russia with Killswitch Engage and Caliban. Their second single Сентябрь (September) was released in the same year. Stigmata signed to Navigator Records and produced the fourth studio album Stigmata. In the end of 2007 Phil Terpezki left the band and Fjodor Loschkin became the new Drummer of Stigmata.

In 2008 the band released their second DVD entitled Acoustic & Drive.

In 2009 the band released their third single Взлёт и Падение (Rise and Fall). In the same year the fifth studio album Мой путь (My Way) was released. The album was released in two versions: A normal version with 10 tracks and a Digital version with an Intro, Outro and three music videos.

In summer 2010 the band played with Bullet for My Valentine on some concerts. A year later the band shared stage with Jane Air and The Korea.

Russian TV Channel A-One is one of the band promoters next to the Russian version of BRAVO and Vic Firth. Russian online retail store CD-Russia.com sell the albums worldwide.