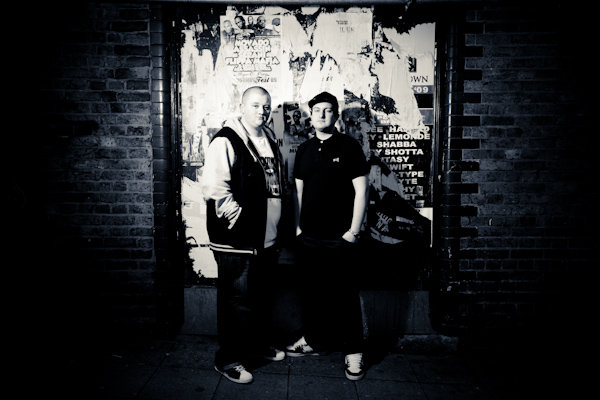 The band formed in 2002 and quickly became renowned for their riotous live shows. By 2004, they had started to perform so-called «guerilla gigs», which saw them play on a Hammersmith and City Line tube train, on the dodgems at the Leeds festival, and on the famous Abbey Road crossing in London. The band, particularly lead singer Dominic Masters, maintain a close relationship with their fanbase, affectionately known as the 853 Kamikaze Stage-Diving Division. The band are also known for accessibility which resulted in the popularity of the websites forum, which played a key part in keeping the fanbase together and organizing the following to collect together for gigs.

Their self-titled debut album divided critics and public alike on its release in 2005. Whilst NME gave it 8/10, Q Magazine rated it one of the worst albums of the year, mocking Masters’ boastful attitude towards drug abuse. However, the album did spawn three Top 40 singles for the band; while debut single This Is For The Poor, narrowly missed the top 40 on its release in April 2004, Stan Bowles reached No. 36 in November 2004.

In January 2005 3rd single Lackey reached No. 21 in January 2005 and in April of that year the NME awarded The Others the John Peel Innovation Award at the Brat Awards. Following this, William became the band’s fourth and final single from their debut album charting at No. 29.

In an interview with Phoenix FM in December 2005, the band confirmed that they had left Poptones and, in October 2006, they released their second album, Inward Parts. Three singles were released from this album, Truth That Hurts (in 2006), Always Be Mine (in 2007) and Probate (in 2008). In August 2007, drummer Martin Oldham left the band for health reasons. Further UK and European live dates followed and in February 2008, the band went on a temporary hiatus.

After a (publicly) quiet period, The Others played their first live show in three years, a sold out show at The Lexington in London.[1] One month later they decamped to a studio in Kent to record eight new songs. In April 2012 the band released the double A side single Hardly Know Me/I’ll Keep You Safe; their first new material in 4 years and this was accompanied by a two week UK tour.

On Christmas Eve 2012, the band gave away the demos for the 3rd Album; «Songs For The Disillusioned» for free via http://theothersuk.bandcamp.com/ . This news was subsequently covered by the NME: http://www.nme.com/news/the-others/67935

The response was tremendous, surpassing the band’s expectations, going viral and picking up coverage from in the UK, as well as Spain, France, Germany, Argentina and Italy amongst others. The free download allocation was reached within 2 days and in order to meet demand and keep the tracks available for free, they had to be uploaded to 4 separate sites.

In January 2013, the band announced their decision to offer fans a free download package for every month of 2013. This news was subsequently reported by the digitalspy website.

A message from the band said: “After all the interest we received in terms of downloads/plays/streams of the demo album, we thought it would be nice for people to be able to hear how two of the songs had already developed from those skeletal 2011 demos.”

As part of the bands comeback they are also set to return to Glastonbury to play on the William’s Green Stage. This will be the first time the band has played the festival for 8 years when they last played on The Other Stage in 2005.[2]

On Christmas Eve 2013, the band followed their 3rd album demos giveaway by giving away the re-recorded, remixed and properly produced version of «Songs For The Disillusioned» for free via http://theothersuk.bandcamp.com/.